The First Knowledge Forum of Faculty of Law 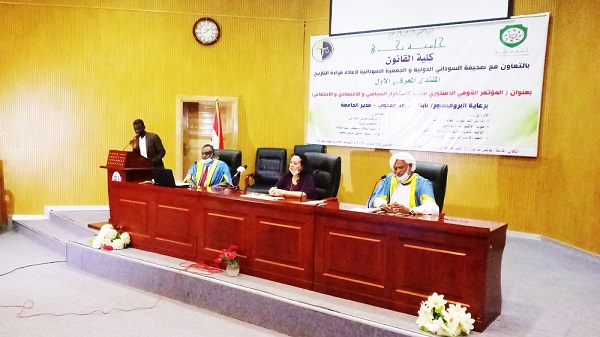 Professor Babikir Mohammed Mahjoub, University of Bahri’s Vice-Chancellor, assured the necessity of holding a national constitution conference in order to establish the construction of the Sudan and find solution for the crisis that the country has been suffering from since its independence.

During addressing the first knowledge forum, in the Ministry of Education and Scientific Research hall, organized by Faculty of Law at the university under the title “The National Constitution Conference as an Entrance to Political, Economical and Social Settlement”, honored by the presence of the Dr. Rajaa Nicolay, Sovereignty Council’s member, Mahjoun called for holding a national constitution conference in which representatives of all the Sudanese community entities take part aiming at reaching a permenant constitution and establishing a national state of law.

From his part, Dr. Hisham Omer Mohammed, Dean of Faculty of Law at the university, said that the forum and the national constitution conference are a launch of empowering the national reconciliation through scientific research, targeting developing a country where everybody work hard to have a state that preserves human rights and admits justice.

During the forum, many papers have been presented including: the constitutional conference: dimensions and identity, Sudanese economy identity, federal monetary state in the shadow of de-centralized regime and the “security and military” strategic dimension.